Wastewater sludge treatment is a known sore. Treating it requires dewatering, conditioning, storage, hauling and final disposal – all adds up to significant manpower, capital costs and operating expenses, it requires large equipment, supplies and chemicals. Disposal is especially problematic as landfills are costly and limited in capacity, incineration has its own staggering costs and complexities,  and land – based disposal is running into resistance and regulatory issues.  All these processes consume energy and provide no opportunity for renewable energy use.  Everywhere you look things are becoming more and more difficult, complex and expensive when it comes to sludge.

Arrow system developed a solution which addresses the above issues as well as produces Emissions-free Energy (electricity and heat) and useable Raw Materials. 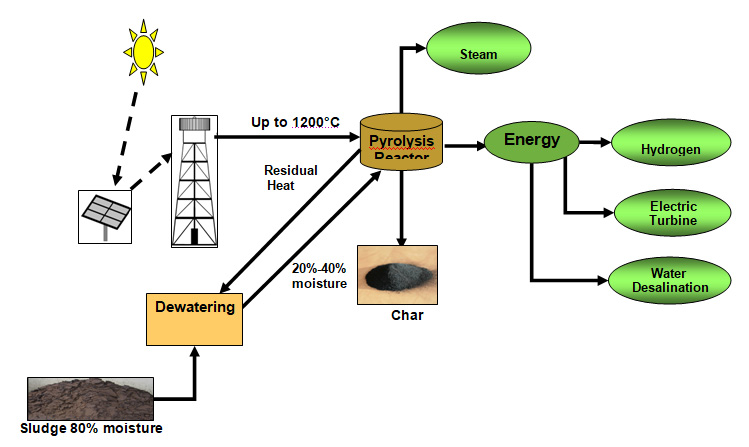 The solution revolves around installation of a solar powered processing facility on the premises of a waste disposal plant.

A solar power tower is built on an existing structure.  The tower receives sunlight from sun-tracking mirrors (heliostats) which are positioned around it, utilizing unused or underutilized areas of the plant (open space or structures).  The accumulated energy is directed towards a pyrolysis reactor.  Wastewater sludge harvested from the plant and collected in storage tanks undergoes a gradual and successive initial drying phase.  Once the sludge has dried, it is transferred to the pyrolysis reactor and undergoes pyrolysis and gasification (during which molecular chains are broken down).  The end product is clean steam, emissions-free energy and raw materials.

The system is aimed at a wide spectrum of clients and can treat various types of sludge such as:

The system is modular and can be adapted according to clients’ needs.  Plants producing large quantities of sludge will require a large number of heliostats as opposed to plants producing smaller amounts.  Sludge from various types of industries will be treated in a pyrolysis reactor and will produce different types of raw materials but will all produce energy.

The solar facilities will be targeted at existing infrastructure – roads, buildings, ponds and tanks – on which solar power towers and heliostats could be positioned.  Leveraging these assets enable drastic reduction in establishment costs as well as simplification of licensing procedures.

Income will be generated from 3 sources:

Operating under pyrolitic conditions (temperatures up to 1200˚c), the facilities are emissions free, and produce their own energy requirements.  Since sludge may be accumulated, its treatment does not require around the clock, continuous work which is aligned with sun availability. These systems, therefore, provide a reliable and comprehensive solution for solar energy plants.

Proper application of solar energy can make an important but problematic technology into one which is both economically feasible and available. The proposed application also addresses serious waste remnant issues, proposing its conversion into emissions-free, viable energy. The system is expected to be highly profitable without any governmental aid.

Comparison to other technologies

The solution is unique and innovative.  It can be compared to solar electricity production technologies and to traditional sludge treatment plans. 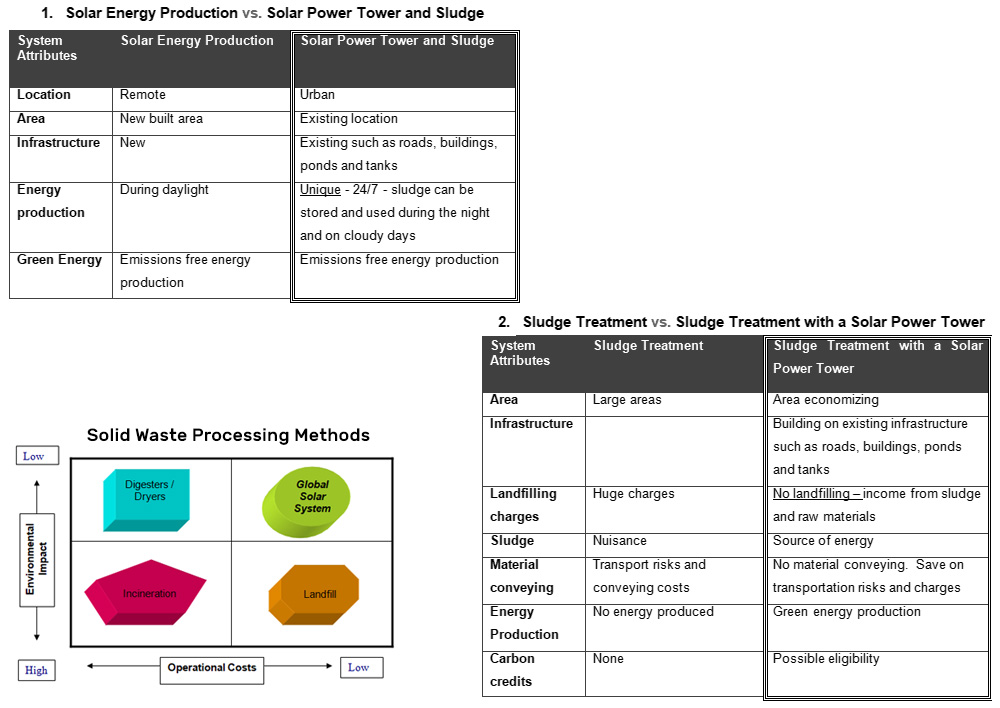 Appendix A -the basic terms for the offered process

Pyrolysis
It is a form of incineration that chemically decomposes organic materials by heat in the absence of or little oxygen.  Pyrolysis typically occurs under pressure and at operating temperatures above 430 °C (800 °F).  In practice, it is not possible to achieve a completely oxygen-free atmosphere. Because some oxygen is present in any pyrolysis system, a small amount of oxidation occurs.

Gasification
The gasification process converts any carbon-containing material into a synthesis gas composed primarily of carbon monoxide and hydrogen, which can be used as a fuel to generate electricity or steam or used as a basic chemical building block for a large number of uses in the petrochemical and refining industries.

Sewage Sludge
Sludge originates from the process of treatment of waste water. Due to the physical-chemical processes involved in the treatment, the sludge tends to concentrate heavy metals and poorly biodegradable trace organic compounds as well as potentially pathogenic organisms (viruses, bacteria etc) present in waste waters. Sludge is, however, rich in nutrients such as nitrogen and phosphorous and contains valuable organic matter that is useful when soils are depleted or subject to erosion. The organic matter and nutrients are the two main elements that make the spreading of this kind of waste on land as a fertiliser or an organic soil improver suitable.

Solar power tower
Is a type of solar furnace using a tower to receive the focused sunlight. It uses an array of flat, movable mirrors (called heliostats) to focus the sun’s rays upon a collector tower. The high energy at this point of concentrated sunlight is transferred to a substance that can store the heat for later use.

Heliostat
It is a device that tracks the movement of the sun. It is typically used to orient a mirror, throughout the day, to redirect sunlight along a fixed axis towards a stationary target or receiver.  Many heliostats can be combined together to concentrate the suns energy. Energy can be collected for electrical generation with photovoltaic cells or can be used to heat a medium such water or molten salt.

Catalyst
A substance that accelerates the rate of a chemical reaction but is otherwise unconsumed by the reaction. A catalyst participates in the reaction, but is neither a chemical reactant nor a chemical product of the net reaction.  Generally, catalysts work by providing a lower energy pathway for the overall reaction to occur. This usually occurs by the reaction of the catalyst with one or more reactants to form a stable intermediate that subsequently reacts to form the final reaction product and regenerate the catalyst.

Dewatering
The process of natural, chemical, or mechanical removal of water from sludge, thereby reducing it to a damp solid with the lowest level of moisture attainable.

Steam
It is a pure, completely invisible gas.  At standard atmospheric pressure, pure steam (unmixed with air, but in equilibrium with liquid water) occupies about 1,600 times the volume of liquid water. In the atmosphere, the partial pressure of water is much lower than 1 atm, therefore gaseous water can exist at temperatures much lower than 100 C.  A steam engine uses the expansion of steam in order to drive a piston or turbine to perform mechanical work. In other industrial applications steam is used as a repository of energy, which is introduced and extracted by heat transfer, usually through pipes.

Char
The solid material that remains after light gases and tar have been driven-out or released from a carbonaceous material, during the initial stage of heating which is known as carbonization, charring, devolatilization or pyrolysis.

Syngas
This is a gas mixture that comprises of carbon monoxide, carbon dioxide and hydrogen. The syngas is produced due to the gasification of a carbon containing fuel to a gaseous product that has some heating value. Some of the examples of syngas are as follows – gasification of coal, waste to energy gasification, steam reforming of natural gas to generate hydrogen.  Syngas has 50% the energy density of natural gas. It can be burnt and is used as a fuel source. The other use is as an intermediate to produce other chemicals.

A thermal solar system that treats sludge waste and transforms it to energy and raw material by harnessing the solar energy to chemically transform the waste.

The Arrow System represents a low cost, comprehensive solution that serves as an economic waste disposal alternative and provides a source of “green energy” and raw materials.